The afternoon I met Craig Arnold was a stressful one. It was my first day at the University of Utah (I’d just transferred from SLCC), and I was trying to pull a fast one. I had not taken the prerequisite for English 5520 (advanced poetry writing workshop), but regardless, had put myself on the waiting list. I’d been writing poetry for most of my life, and thought I had some skill. But that didn’t mean the professor was going to agree with me and allow me into the class.

Thirty one years old, Craig was a PhD candidate, the English department’s golden boy, about to have his first book published. He was the Yale Younger Poet of the Year for 1998, and from the very first moments, of our relationship I wanted his approval.

Craig asked me to email a writing sample, and if it wasn’t crap (his word), he’d sign off and let me stay in the class.

The workshop was small, 12 students, and my presence would kept no one else from joining the class, but I stressed over the writing sample for days. I highly doubt he gave it all that much thought, but he told me the poems were passable, that there was some potential.

In the workshop setting he was absolutely ruthless and absolutely always on point. Never before (or since) in my writing life have I felt like someone genuinely wanted my writing to be successful as when Craig was ripping apart my poetry.

I am grateful for that.

Craig was also in a rock band called Iris. He played guitar and sang terrible songs with really odd lyrics. I saw them perform at a coffee shop in downtown Salt Lake City. Forty people were there, some of whom were likely annoyed that their late night coffee came with the added price of listening to live music.

And he had literary groupies who stood in front of the stage, sang all the songs, hung around after the set just because. Of course Craig soaked every moment of attention.

At the end of the semester, we gathered at the apartment of one of the members of our workshop to celebrate, drink beer, say goodbye. Craig’s book was coming out soon, but all he wanted was to talk about the female body builder roommate of our cohort (her photos from competitions were all over the walls), and how many times he’d had sex that day.

Three times in case you were wondering, and with a wink in my direction, he implied he was ready for a fourth.

But that was his personality- Brash, bold, confident to the extreme. And oh, how he could write. His poetry blew me away. My favorites were his narratives. One in particular was composed in couplets that flowed seamlessly from end rhymes to slants, rich and eye. His stories were precise, and his writing clean, tight.

That night at the class party, five or six beers into a twelve bottle night, after I spent fifteen minutes complaining about my lack of writing success, my envy at his, without the slightest guile he shook his head and said “your day is coming. Be patient.”

The most important thing he taught me about writing poetry- Form is the vehicle, not the destination, which altered the way I approached writing, changed how I used words.

I saw him sporadically after my graduation. He’d show up at the library where I worked, and we talk about what he was doing. He always asked about my writing, and I always lied, telling him it was going great.

A little over ten years after our first meeting, I learned he’d gone missing while hiking on the small volcanic island of Kuchinoerabu, Japan. Searchers found traces of him on a trail near a high cliff and it is presumed he fell to his death.

I had not spoke to him or seen him in at least 8 years, but losing someone I thought of as an important guide on my writing path was hard.

I don’t know what made me think of him today or why I felt like I needed to write down a few of my memories.

Craig could rub people the wrong way, and there are likely more stories about the awful things he did than the positive ones, but he was always good to me. I admired him for his fearlessness, his talent, his friendship.

He only gave us two collections of poetry, but they are powerful and worth your time. Check them out here–

All of us have people who influenced/impacted our lives, changed our direction for the better. I’m curious about yours.

I’d been looking forward to the last week of April for about 6 months. A good friend of my wife’s was getting married and had invited us to the ceremony and weekend activities. The event was to take place at the Hotel Monaco in Portland, Oregon.

I’d only been to Portland once before (in the summer of 2003) and honestly didn’t enjoy most of that trip. We stayed in a cheap hotel on the southeast end of town, had to drive and fight for parking way too much…

But I really enjoyed my time exploring Powell’s Books. I vividly recall walking into the store, feeling overwhelmed by the massive shelves, the sheer number of books, the impossibility of ever seeing everything.

When I heard the wedding was in Portland, I knew I was going to return to Powell’s and that was an amazing feeling. I made my list of 1st printings I wanted to find (it’s a new passion for me, collecting certain books in 1st printings. I am more of a snob all the time) and tried to keep my anticipation at a minimum.

We picked our hotel (The Mark Spencer, a great place if you’re looking to stay in a great area of downtown Portland. The food options alone will blow your mind) from those near the Monaco and in close proximity to Powell’s. We couldn’t have done better. This is the view from our hotel window. 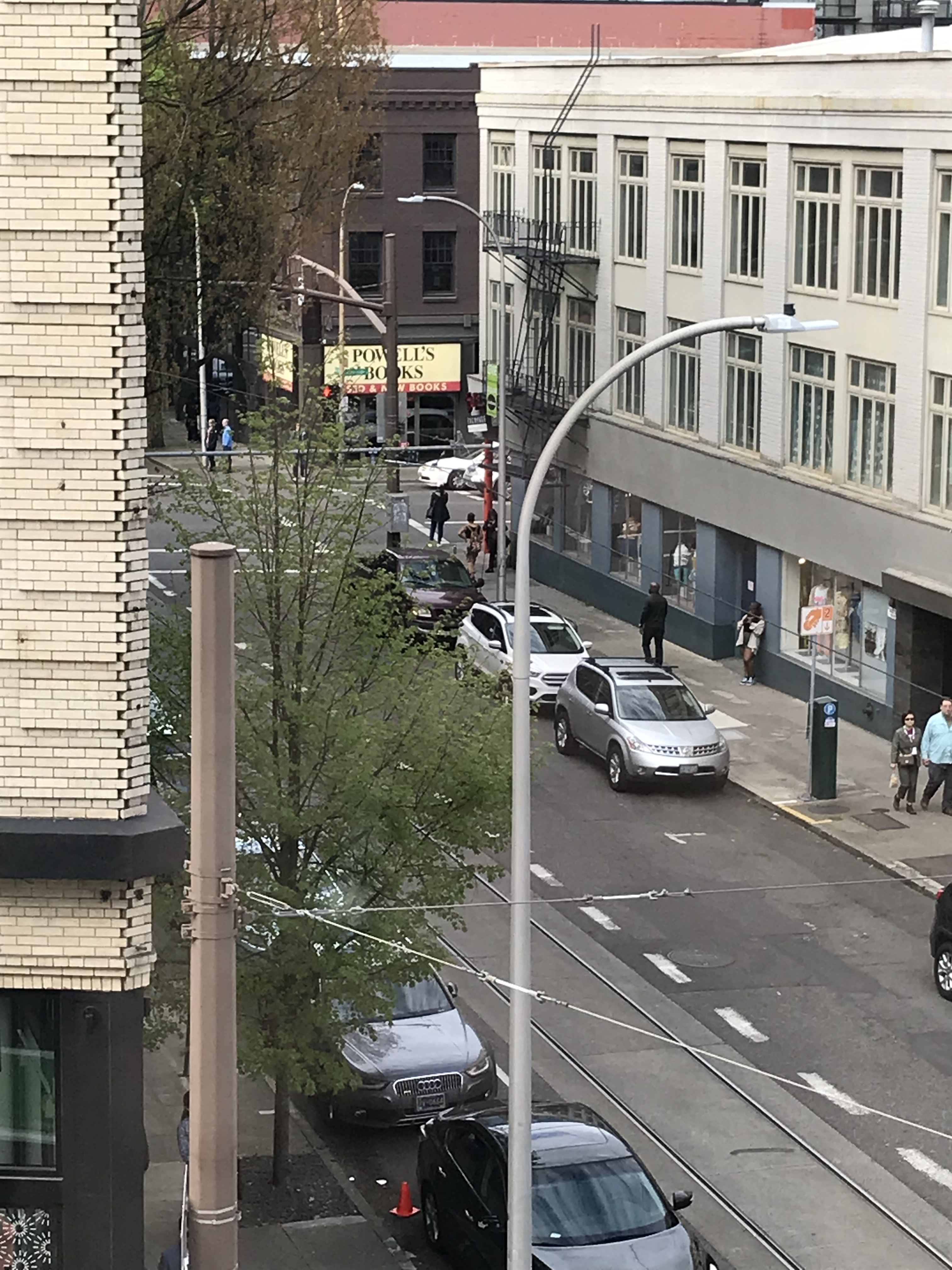 We arrived on Friday and planned to spend all day Monday at the bookstore, but when our dinner with the bride and groom ended earlier than we expected, we had several hours to spend exploring and shopping.

In my head, I was going to find all these amazingly clean copies of books I’d been looking for for quite a while. When I reached the halfway point of my list and hadn’t found a single 1st printing, I began to worry. In my memory, Powell’s was the place to find specific copies of books, not just any old mass market or trade copy, but that is all I was finding.

Then the flood gates opened. I found 80% from the second half of my list. So many that my basket was almost too full for me to effectively search for more. My arms grew tired.

I also learned how tricky the staff at Powell’s can be. After my success in the second half of the list (and finally noticing copies in the staff only section), I revisited the first half, checking the overflow shelves to see if I’d missed anything. Sure enough, just out of my reach was a hardbound edition of a Russell Banks book I was looking for. I had to get a staff member to retrieve it, which I hated doing, but it was worth my discomfort as I  found a signed 1st printing of Cloudsplitter ($6.95 people). This trend continued with other authors, multiple trade copies on lower shelves and editions I wanted up high. It makes sense- Leave the less valuable copies where the average buyer can see them, and place the collectible copies just out of reach.

My unexpected score was a 1st printing of Watership Down. Of course when I was showing it to a friend, some of the glue snapped. Luckily the binding is sewn as well as glued, so it isn’t a total disaster.

We visited the bookstore almost every day and I regret nothing.

All in all I spent way too much money, but when I look at my shelves, see some completed collections, it makes my heart glad. Of course there are still many books to buy, and I have to decide if I want to hope for the serendipity of a thrift store or independent bookstore find or give in and buy from online sites.

As for the wedding- It was incredible. I get very emotional at weddings, and I am unashamed to admit that I usually cry. There is something wonderful about two people finding each other in this crazy world that always warms my heart. It is especially poignant when the people are older and have had a rough go of things, been treated badly.

Here is one last photo- some cool art on a building near our hotel.

What is your favorite bookstore? What sort of things do you collect? Am I a total nutjob? 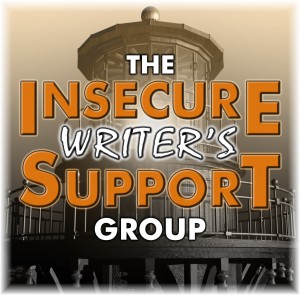 Hey friends! It’s the first Wednesday of the month, which means it is again time for The Insecure Writer’s Support Group blog hop. Check us out HERE and sign up.  You won’t find a better band of writer folk, ready to help you through your struggles and be happy for your successes.

On the writing front, I had an interesting few weeks. Thanks to the IWSG Twitter Pitch Party, I had a small publisher from NYC ask for a full manuscript. I pretty much kept this to myself because I know a request does not mean anyone is about to publish my work. Still, It was hard to contain my excitement.

Everything in the publishing world moves at a snails pace, and I was told to wait 16 weeks before inquiring as to the status of my manuscript. So I waited. Patiently, I might add. As this was my first ever full manuscript request, I was very thrilled and excited as well as anxious. I fought back the desire to tell everyone and anyone about what was happening, because I really didn’t want to get friends and family thinking a publishing deal was right around the corner only to be disappointed.

Last week (the 12th week), the rejection came. And I have to admit, I was pretty annoyed with it. Mostly because of the form-letter nature of the email. I guess I wrongly expected a more personal response, maybe some feedback as to why the manuscript wasn’t a good fit for their publishing house. Lesson learned. I’ll add it to the others and push forward.

On a positive note, I’ve got a solid query written for this book. Now I need to find the publisher/agent who is as passionate as I am about the story.

Also, I attended an event for the author Jonathan Evision where I learned he had four completed manuscripts written before landing a deal for his fifth book. I’ve got three sitting on my hard drive, looking for a home. Time to get working on the fourth.